A break from what my normal posts are to talk a little about Boston. It breaks my heart that every few months are so there seems to be another tragedy taking place where innocent people are being hurt and killed for no reason. I am lucky that my daughter is only 6 and so far has never mentioned knowing anything about the bombing in Boston yesterday or the shooting at Sandy Hook or at the movie theater in Colorado. I am grateful for her being unaware and the fact that to her she has no knowledge of these terrible events and the fact that it seems they could happen at anytime and anyplace.
As her mom and an adult I don’t get to have that blissful ignorance. I have to be aware of what is going on in the world. I am aware that there are a lot of mother’s and father’s whose children go to school and don’t come home I get to think  of that poor man yesterday running a marathon and his whole family gets caught in a bomb blast. My heart breaks for them because as a parent I realize what losing my daughter could do to me and this world seems to be becoming more and more unpredictable. It’s only a matter of time before I have to comfort my child when she becomes aware of this. I at least made it to high school before I really became aware of the real dangers out there. When I was a Sophomore the Columbine shooting happened and then all the copy cat school shootings. It was a scary time and I was afraid of it happening at my school At least I was a teen though and at least had some idea of the actual risk and an ability to process what happened. My daughter is in Kindergarten and I will be lucky if I can make it a couple more years before she starts to become aware of what is happening. Then when 9/11 happened I was a senior and it was terrifying but the way people pulled together was comforting to me and I could process what was happening. I wish I could give the kids of today the same gift of at least becoming teens before the reality of violence and senseless death are thrust upon them.
All I can hope to do is to be able to comfort her as needed and be a good listener when she’s scared and needs to talk. I can only try to protect her and reassure her that I will protect her to the best of my abilities. We can pray together and try to help people in need. I will try to remind her that although there are bad people in the world and they do horrible things that there are more good people than bad. That although we all have our differences that in times of crises we seem to come together and want to help each other and that it’s important to try and focus on the heroes and survivors and not give too much importance and attention to the villains. That’s what is kind of nice about it not being known who is responsible for this yet. Don’t misunderstand me I want the people who did this caught and punished. What they did was horrible and wrong. It’s just kind of nice to focus on the good that came out of yesterday. The ex football player that carried people to safety, the strangers that cared and comforted those in need. When the person who caused a tragedy is known so much attention is paid to them that the good people can sometimes be overlooked. I need to believe that the villains are a tiny, tiny fraction of people and that the good and helpful people make up the majority.  There are so many stories of helpers and people who risked their own lives to save others that I would rather focus on. That is what I hope to teach my daughter about when she begins to learn of things like this. 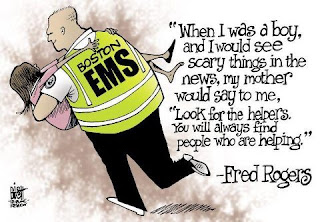