Because I believe that when you know better you do better. So if I teach her better she will know better there for do better. So I wrote this post when my daughter was in kindergarten now in 2015 shes starting third grade so I’ve made some updates to the post as I’ve learned more as a parent and gained more experience as a mom and my daughter’s gone through more years of school and friendships.  So far she’s mostly had good friends and we’ve encountered not too many bullies. I work very hard on all these five steps each year because I think it’s important as parents to do what you can to raise kind and considerate children.
Above all  it’s important  to me to raise a kind child more than anything else. We are only at the beginning of her school journey but I figure if I start now maybe more of what I say and do will stick with her as we get to the harder years. Already in her class there is a group of mean girls. Luckily she isn’t one of them, and that’s not just my opinion other parents have talked to my husband and I about it. These are the steps that have worked for me in preschool and Kindergarten to raise a kind and nice child. The world is changing and bullying is getting worse with more tragic consequences, I can’t change the world but I can raise my daughter to be the best that she can and hopefully not be a bully and not be bullied. 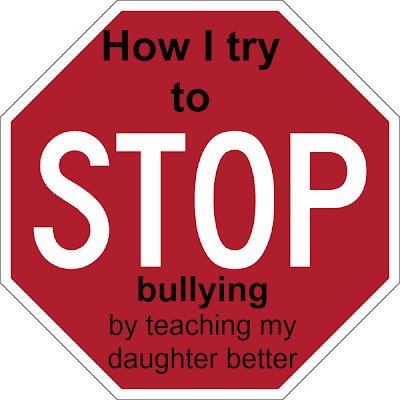 1). I have worked hard to build up her self esteem. Not just about her looks, though she gets told often that shes cute and pretty by us and family. I also make sure she knows that she is smart, funny and a good person. I don’t want herself worth to be tied to her looks. That way if at some point in the future her looks get teased or criticized she doesn’t fall apart thinking that the only thing good about her is lost. I wanted her to know there is so much more to her than how pretty she looks.  Now at nine she still knows that shes amazingly confident and so far she hasn’t had any issues with self esteem. Now if only this can continue on through the tween and teen years. I will keep doing my best but I’m sure like every young girl she will have her moments of self esteem issues.
2). I am involved in her life I know it’s easier now because she’s young but I want her to know that I care how her day is, who her friends are, how she did on her spelling test. I make sure to praise her achievements and really listen to her stories. I want her to know I value you her so that when she has something important to tell me she will trust me with it. I believe in building that foundation now.
3). I have always been open about the differences in people and when she has questions, I answer them honestly and when she comments on something I respond. She and I have talked about different races, homosexuality, disabilities and it’s always age appropriate but I want to keep things open so she can ask questions. This is still one of the things I believe so strongly in as a mother. The more she knows what makes people different I think the less those differences will make. She also is being taught to be respectful no matter what those differences are. We have gone over that even if someone looks or behaves differently than you they deserve respect. She really seems to understand this well. From other parents I have learned that she has stood up for kids with autism and for a boy being teased for liking “girly” things by other boys.
4). She knows we have her back. When she has stood up for other kids we really praise her and make sure she knows how special that is. If someone is mean to her I hear her out on the story and try to encourage her and guide her towards working out the problem on her own. I can’t be her body guard 24/7 so it’s important she learn to deal with problems without me. If the problem isn’t being resolved or the situation is too big for her to solve on her own I step in. She knows I will stand up for her and will fight for her. Like last year I wrote she was being abused by another student and we went to the teacher when she told me it happened again I went to the principal and kept fighting till I had him moved to another class. She couldn’t deal with that all on her own so she came to me for help and I took over.
5).  I emphasize kindness in how she treats others. We go over the phrase ” you don’t have to like everyone but you must be kind and polite to them  probably once a week” In situations like well Matthew said Katie was a baby so tomorrow I’m going to tell him he’s mean and a baby. I have to stop her and say no how about you just be nice to Katie and if Matthew says it again ask him nicely to please stop being mean to your friend. Then if it gets worse from there or keeps happening go tell the teacher. Just because he was mean doesn’t give you the right to be mean back.
I know I am by no means an expert on parenting. As she gets older things will change and things that work now wont work then but as a mom of a child in early elementary school this is what has worked and my experience. Maybe if more parents really took the time and thought about how to raise kids to not be bullies we wouldn’t have mean girls in Kindergarten.
Tweet
Pin55
Share6
61 Shares
Previous Post: « Come on get happy
Next Post: my oh so exciting life »