There are a million of those if you really knew me posts popping up in my blog feed but I decided I’d rather just do a post about what I’ve been through   than list off a bunch of facts about myself. I do a lot of posts with questions and answers so if you regularly read my blog you probably already know a bunch about me.
The thing that defines me that changed me in the most profound way was my stroke. My life changed probably forever on February 2,2010 and I have been trying to redefine it since then.
It has slowly through recovering over the last few years and lots of therapy changed the course my life was on. My family and I were falling apart and although we might not have realized it we were going to break one way or another. Our marriage was going to end if things had continued on the path they were headed. We were consumed by stress. We were falling apart financially, not talking about it and the day before the stroke had just moved into a place I knew we could not afford. My pride and insecurity would not allow me to talk to my husband about it so we just smiled like everything was fine and moved in. I should have gone to my family and explained what was going on but I didn’t. They can’t say for sure that stress played a factor in my health problems but it seems like a mighty big coincidence that I had a stroke the day after moving in.
Since then we have moved into a place we can afford. I am on disability and my husband has started doing real estate as well as his current job to eventually earn more money. We can talk about money more it might cause some arguing but at least we aren’t hiding things from each other.
I have also learned a lot about myself and the people around me. When something like this happens you learn who will stick by you and who won’t. I’ve grown closer to some people in my life and there are some people, some of them family, who really turned their backs on me. It’s disappointing when you learn that people you really cared about and were there for when they had problems in their own lives are unwilling to do the same for you.
One of the biggest helps to me after everything was starting therapy. It’s taken awhile to find the right fit for who can help me the most but I think I’m finally working through some issues I had in my life for awhile and really dealing with the last three years.
I know eventually I will be able to say with confidence that I’m glad the stroke happened because of all I’ve gained from it and that all the struggle was worth it. I’m almost there but since I still have difficulties with a lot of things due to the brain damage I can’t quite say it yet. I do think it was my stroke of luck though because it did save my marriage and our family. I can’t tell you how many people thought my husband would leave because this whole situation has been so hard on him as well but he didn’t and I’m glad he stuck by me through all of this. I am convinced that because we made it through all of this that there is nothing that can pull us apart.
If you ever have a question about my stroke or any part of my recovery feel free to email me and ask. I am completely comfortable answering anything about it.
Pins of quotes that express some of my feelings about the whole process 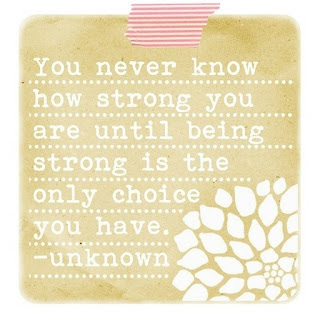 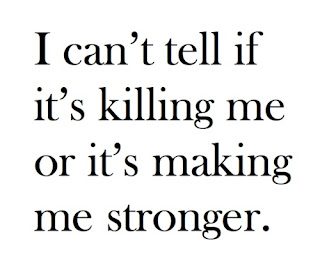