Mama Kat’s writing prompt   1.) Share a story about a stray you took in or an animal you once rescued

I’ve never rescued a pet as an adult. All the pets I’ve had since being an adult I’ve been given or have chosen to get. I would rescue any pet in a second though. I’m a big softy when it comes to animals and so is my daughter. Here is the story of the time we rescued a dog when I was a child though.
When I was in the 2nd grade my dad saw a dog playing in the road in front of his work in the rain.  He chased it down and caught it and brought it home. He had seen the dogs mother before and knew they were strays so he thought he would take the puppy home.   I happened to be home sick from school that day so I was the first to play with him. He was a chow puppy and so cute. We named him Sam. Not long after we got him we went on vacation. We had two other dogs but they were older so they could stay in our yard while we were gone and just have someone come by to feed them and change their water. Sam was a puppy though and we were afraid he would try to dig out of the yard, so we asked my grandparents if they could watch him while we were gone.
Well when we got back from the trip my grandpa had fallen so in love with Sam and just didn’t want to give him back. We had two other dogs and probably a cat or two, we usually did and they had no dogs so we let them keep Sam. It worked out well for everyone. My grandparents loved him so much. Sam got to be spoiled rotten for his entire life. So much that when my grandparents moved from a two story house to a one story house and said it was because my grandpa had trouble getting up the stairs. The whole family kind of felt a bigger reason was because Sam was getting older and it was hard for him to get up the stairs, so it was time for a new house. He was even included in our large whole family professional pictures and placed right in the middle. As for my family. My parents got to tease my grandparents about being dog thieves for years.  Telling everyone to never let my grandpa pet sit or you would never get your pet back.  We also got to see him all the time so it wasn’t like just giving away a dog.  He lived a good life and died a few years ago at I think 13 or 14 which is pretty old for a chow dog.  Now that my grandpa just died I like to believe they have seen each other again. 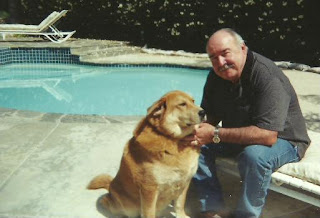 hanging out by the pool. 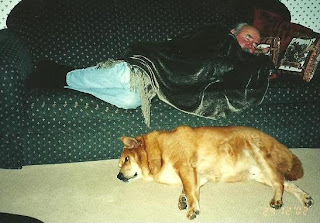 Napping after Christmas
Now tell me how could we take these two guys away from each other?
Tweet
Pin
Share
0 Shares
Previous Post: « Happy Independence day!
Next Post: Monday Listicles: 10 things I would miss / not miss if I die today »